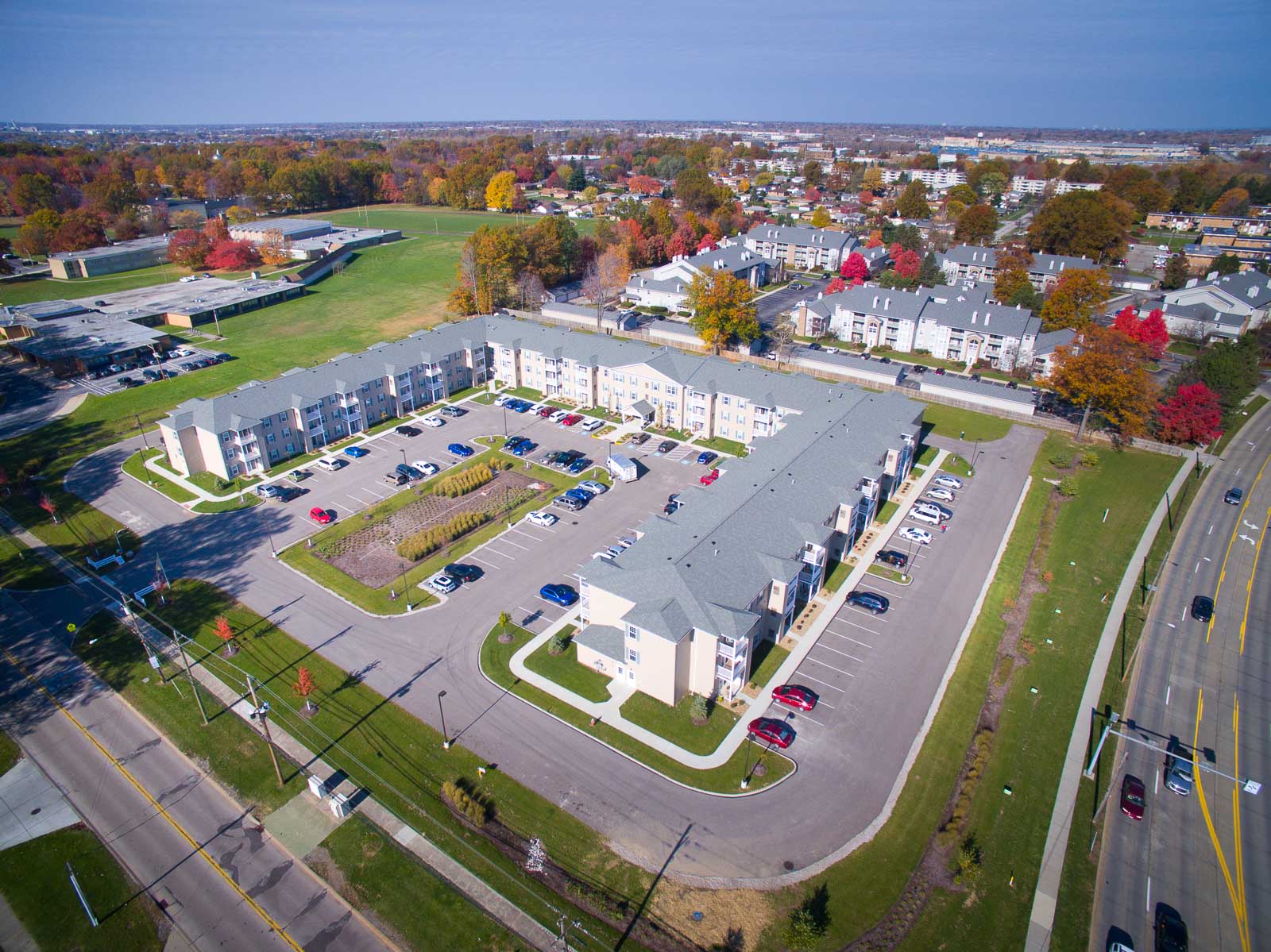 In a $343 million transaction announced in late July, Toledo, Ohio-based Welltower acquired a portfolio of 32 Clover communities, including four under development.

“Welltower is delighted to add Clover Management, a developer and manager of independent living communities that delivers a quality experience at an affordable price, to our family of best-in-class operators,” a Welltower spokesperson told Senior Housing News.

The “affordable price” is around $1,000 a month for a one-bedroom unit, inclusive of heat, electricity, cable TV and water, Clover Management founder and CEO Michael Joseph told SHN.

Developing and operating buildings at that price point is no easy feat, but over the course of two decades, Clover has perfected its approach, Joseph said. Now, backed by Welltower and also private equity giant The Carlyle Group, Clover is scaling up to serve the quickly growing and massive cohort of middle-income seniors.

“There doesn’t seem to be a limit to demand,” Joseph said.

Joseph started out as an investment banker in New York City, doing real estate finance in the 1980s.

“At some point, I had an epiphany and said, the smartest guys at the table are not the investment bankers but the developers,” he told SHN. “They were creating real value and real wealth. I decided I wanted to do that.”

Joseph incorporated Clover in 1987. The company did not do development right out of the gate, but began by acquiring apartment buildings in Buffalo, which is Joseph’s hometown. Clover is based in nearby Williamsville.

Then, a savings and loan asked Clover to step in and finish a development that had gone south.

“We managed to muddle through building and selling out their product for them,” Joseph said.

With the development arm of the company up and running, and Clover also managing its own buildings, Joseph turned to senior housing — specifically, low- to moderate-income housing that could take advantage of tax credit financing. In this period — the 1990s — Clover also extended into doing construction.

“I intended to hire a general contractor … and as we were doing the budget, we realized the money wasn’t there, so we did it ourselves,” Joseph explained.

While there was some serendipity in how Clover grew into a vertically integrated development, management and construction company, Joseph’s next move was very intentional. He wanted to create apartment-style living for seniors at a middle-market price point, in buildings custom-designed for that age group.

Clover sought financing, and the bank wanted to see examples of similar projects. Joseph could not find any. Neither could a consulting firm he hired.

“I said, we’re doing something no one’s ever done, but it makes sense,” Joseph said. “We built it and it worked. We built another one, and another one, and now we’ve completed 32 projects and we’ve got 10 under construction right now that will all be coming online within the next 12 months.”

Clover has found these buildings are successful in metro markets outside of large cities where development costs become prohibitive. In addition to the Buffalo area, the portfolio includes cities such as Scranton, Pennsylvania; Pittsburgh, Pennsylvania; Cleveland and Toledo in Ohio; and Indianapolis, Indiana.

Within these markets, Clover seeks out infill sites near retail and other amenities.

“Seniors like to stay where they’ve been, they don’t want to move across town,” Joseph observed.

Clover also tries to create clusters of developments within any given market, to achieve efficiencies in construction and management — for instance, the ability to offer van service for resident transportation.

These efficiencies help Clover keep the rents low, and the company also does value engineering — but Joseph is tight lipped about the specifics.

“It’s proprietary, because we’re building way cheaper than anybody that I know of,” he said. “We’ve figured out over 25 years how to really drill the cost down on these things.”

The buildings are entirely privately financed and do not rely on tax credits.

In addition to the tight control on construction costs, Clover has a lean operating model. Similar to a multifamily apartment building, a fully staffed Clover independent living community might consist of a manager, a super, a maintenance person and potentially an assistant manager. The building management helps the residents organize activities, but programming budgets do not exceed a few thousand dollars a year. There is no dining component.

While “senior rental housing” might be a term that others use to describe Clover’s offering, “active adult” is not accurate, in Joseph’s view. That’s because people who move into the buildings tend to be in their mid- to late-70s.

Although some residents end up moving to assisted living as their needs increase, many age in place by availing themselves of visiting nurses, meal delivery services and other resources.

Potential residents are not deterred by seeing that some of their future neighbors are frail, Joseph said. Most new buildings are fully leased within a year of opening. One recent project in Pittsburgh was 100% pre-leased.

Some projects do take longer to lease, but every property in the portfolio has ultimately performed up to expectations, he said.

The need for middle-market senior living has been a major topic under discussion within the industry in 2019. In large part, that’s driven by research findings released in the spring by the National Investment Center for Seniors Housing & Care (NIC) and academic institutions.

Those findings showed that the cohort of middle-income seniors is set to massively expand in the coming decade, and a large percentage will not be able to afford senior living at today’s prevailing market rates.

As of June 2016, the average initial monthly rate for independent living was $3,181, according to statistics shared by NIC.

Figuring out an affordable, profitable model for senior living is “imperative,” Welltower CEO Tom DeRosa said at an event in Chicago last June. Previously, he had said that the REIT is actively focused on more affordable models.

Several challenges stand in the way of a scalable middle-market senior living model, with labor being a particularly difficult cost-driver to mitigate. For this reason, active adult or independent living products that do not employ large care staffs are a logical starting point.

However, hitting a middle-market price point is far from easy even in this type of product, Joseph said.

For high-end properties, there is a lot of leeway in terms of development and operating costs, and for affordable products there are government subsidies to tap into. Creating the middle-market offering puts the pressure squarely on the developer and manager.

For this reason, competition in the space is still relatively sparse. In markets like Buffalo where Clover has made a significant impact, some “copycat” properties have emerged, Joseph said.

He does anticipate competition to heat up in the coming years, but in the meantime Clover is building up a first-mover advantage by gaining scale across a significant footprint. The company is eyeing markets as far south as the Carolinas, west to Kansas City, and north to Minneapolis. The goal is to build 15 new properties in the next 12 months and more in subsequent years.

Washington, D.C.-based private equity giant Carlyle Group — which had about $223 billion in assets under management in Q2 2019 — is Clover’s financial partner on future developments.

“We have been impressed with Clover’s team, leadership and track record,” Zach Crowe, principal with Carlyle’s U.S. Real Estate team, told SHN. “We look forward to expanding our footprint with Clover through ground-up development for the foreseeable future.”

With Welltower also in Clover’s corner, the company has the potential to access significant institutional capital for the future — and given the size of the middle-income cohort, Joseph believes that even as new competition enters the space, prospects are bright.

“I think room for us to do what we’re doing, and if others come in, there’ll be room for them, too,” Joseph said.